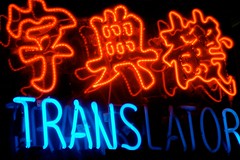 If you have professional photography on your website you will be familiar with the concept of licensing creative product.  Although on reflection it makes perfect sense, I was initially surprised to hear that it works the same way for a creative translation.

Here Nath Schon of  Office Magenta  takes us through the basic differences and what you should watch  out for:

Translations not involving creation (mostly technical translation) are sold to the client. After payment, he/she can use it freely as often as he/she wants.

So does this mean you can get royalties?

Laws are different from country to country. In France, a translator is paid for the actual translation plus he or she gets royalties as an author for each use of the translation: for example; if I subtitle a film and it is broadcast on TV on 2 occasions and published on DVD, I'll get royalties for the TV broadcasting and the DVD.

What if I want to change the translation - or make edits?

Subtitles can't be changed without the translator's authorization, which makes sense because their name is attached to it. Usually the client submits the changes to the original translator for approval.

How does it work in the US?

In the USA, the translator has less control and recognition. A lot more is left to individual negotiation. I ask my name to appear at the end of the subtitles and for final approval if the subtitles have been modified.  I had a few proofreaders ruin my translation by changing a joke so that it missed the target age group - the joke was intended for a 15 year old target group, the proofreader's change lowered the age to 10. Ouch!

Another proofreader changed a slang word, meant to reflect the language used by the Miami mob in the eighties, into a slang word used in France by local gangsters in the fifties or by today's steel factory workers to address the boss. These changes can in the worst case scenario ridicule a text/video (and a translator's reputation).

So, now you know - if you have any questions on how to go about getting your website translated into another language - give us a shout